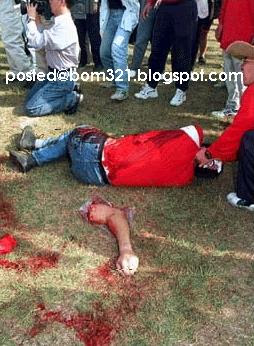 TAIPEI, TAIWAN (10-27), Two man had their arms ton from their bodies as a
result of tug-of-war contest in Taipei. Both men wrapped the rope around thier arm in
a attempt to have a better grip. Their limb were torn when the rope snapped during
the contest, which involved over 1600 participants. Doctors performed a 7 hour reattachment operation and are hopeful that the men will recover up to 70% of the use of their arm.